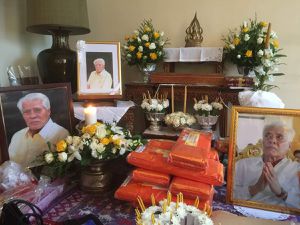 Sixty years of love, of life together. How will I continue without you? How will I fill my days? I know these are questions Bouasambhon has been asking herself since the loss of her husband Siphrachanh on November 19th, 2016 - and that many of us will have too when our beloved leave us.

Pho Ky was born on 16 April 1939, on the eve of a new Buddhist year, the year of the Rabbit and the dawn of the WWII. The youngest son of Sibou Sisombat and princess Onechanh Na Champassak, he grew up in the warm south of Laos, rocked by the Lam Siphandone music and where the red earth of the Boloven Plateau nurtures a rebellious spirit.

Born into a wealthy family of traders, he did not lacked of anything in his childhood. His father Sibou traded between Thailand, North Cambodia and Vietnam where he was in partnership with Bich Phong Family. Still today, if you drive by the bridge of Pakse, you will spot a five-storey building that he built for his six children: Siounam, Sikouang, Sithong, Siseng, Sitha and Siphrachanh (Ky).

The youngest in the family, he was a beloved son, a hothead but who was desesperating. His mom Gna Onechanh used to complain: “I have a son who prefers to ride a buffalo rather than go to school”. And that was true: he preferred to skip school, bribing friends to attend school in his place rather than go to study. His father passed away when he was about three years old and his elder brothers were given the responsibility to raise him. Sikouang and Sithong succumbed to tuberculosis when they were 18 or 19 years old and his mom asked Sitha to look after his younger brother. He narrates: “yes, we were very worried about him. He loved life, to go fishing, meet with friends, he did not want to study. He did things to his liking. When he was 8 or 9, we sent him to Ecole Taberd in Saigon, where the Bich Phong family was established. One day, he escaped from the missionary school leaving on a truck to get back to Pakse. When he was 15, I brought him to Toulouse in France with me. He preferred to go and watch the movies, so-called to learn French”. Thus, pho Ky only received a certificate of primary school. At that time, this was not so bad.

In 1959, at the funerals of Prime Minister Katay D. Sasorith, he met with the love of his life, Bouasambhon Souvannavong, nang Toun. She was 17 and he was 20. It was the roaring sixties, the youth was going out with friends: she was the captain of the basketball team at the Vientiane Lycee, he was roaming with his motorbike with friends. He was a hunk, a James Dean like rebel, with his cigarette, that will eventually kill him, riding his Harley-Davidson. The morning he was laid to rest in his coffin, he looked handsome, peaceful on his way to the nibbhana.

Everyday, he would go to the lycee to wait for her with his big motorcycle, he made her blush. Her father, Bong Souvannavong, was a member of the King’s Council, president of the Constituent Assembly in 1946, several times a minister, he disapproved of the relationship. His future son-in-law was coming from a business family who was not interested in building the Nation and he had no diploma.

Sitha narrates that pho Ky changed overnight in meeting her. He became a serious and hardworking family man. He joined the family business ‘Cheng Sibou’ that his father created. His sister’s husband, Sisouk, continued to develop the company and represented Mercedez-Benz brand in Laos. Sisouk became the fourth brother who looked after him. Pho Ky was sent to be trained in Germany and until 1975, he took care of import-export procedures for the company. He was the jack-of-all-trades, the trusted man, the brother who spent all his evenings at their house to keep company while Sisouk’s kids were all studying in France.

In 1975 with the end of the war, pho Ky and his family fled to France and he continued to work in the family business, Lao Asia grocery store, then took odd jobs here and there. Life was difficult. They lived modestly and there must have been sleepless nights for him to worry if he would be able to put food on the table and if his children would have a roof on their head.

He never complained, never shared his concerns. He bowed down, working day and night. He has never been arrogant or pretentious. He was an honest man, righteous like an I. When others betrayed, he stayed loyal. Loyal in love, loyal in friendship. Where others despised, he sought to forgive. That was who he was: a stubbornness to find a positive side to all things, to take lessons and to soothe the scratches on his heart and on his pride. He erased the misfortunes of life with his big laughs or his resounding voice.

For two decades, he devoted his life to the Lao community in France, supporting his wife in her work as the president of the Lao Women’s Association. They drove more than 40,000 km a year to attend weddings, funerals, birth ceremonies, religious ceremonies, political meetings, but also picnics. He was a man who liked to be in company of others, this is the characteristic of people born the year of the rabbit. Who would not remember the mechouis where a full cow was barbecued, the nights spent dancing, where laughs and drinks were bountiful? He was generous, likeable, ready to help others, too outspoken, reliable. He was loved by the elders and the younger generation. He could live on nothing, loved sardines with tomato sauce, shallots, lime and chilies, the large bowls of pho noodle soup. At home, he relaxed with gardening, looking after his grandchildren and watching Ushuaia.

In the guest book for his relatives and friends to share their thoughts, one can read: he was a strength of nature, solid as a rock, easy to live with, generous, always in good mood, his heart in his hand, always ready to help, reliable.

Do you see us from where you are now? We are now adults, we finished our studies, we have a job, we have loving families. You have succeeded in your life, my father. You had a loving wife, sixty years of love, of life, of arguments, of construction. You have hundreds if not thousands who love you, are looking for your friendship, the warmth of your voice, your sense of happiness, you are a pillar in our community.

I look at your life and I observe ours, going after fortune and fame and I ask myself: isn’t this the essence of life? The raison-d’être?

To be the light for others, a pillar;

Touch our heart and teach us that the essential is in the gift of self?

Aren’t you the demonstration of the Buddhist precepts? You tried to follow the middle path, keeping in your heart the good and throwing away the bad, finding an equilibrium? You followed scrupulously the first four precepts of Buddhism but not the fifth one which is not be intoxicated: you smoked like a chimney and here we are to cry over you, you who would only do things to your liking?

As you leave us, we are revealed to the essential. Piling up a fortune, luxury cars, large houses or branded clothes are meaningless.

Eternity can be found in the heart and memory of those who stay behind, the stories they will tell their grandchildren and their great-grandchildren, the photos they look at with teary eyes, the collapse when they are overwhelmed by memories.

I asked my uncle Sitha when he stopped worrying about his brother. He answered “until yesterday”. And he was 78 years old. Are you trying to skip school again, aren’t you? Are you escaping to take a ride on the buffalo and reach the nibbhana, aren’t you?

This time we will let you go in peace with the certainty that your goodness and your merits will take you to good port.

We wish you to take the road to happiness, as you used to say, father.