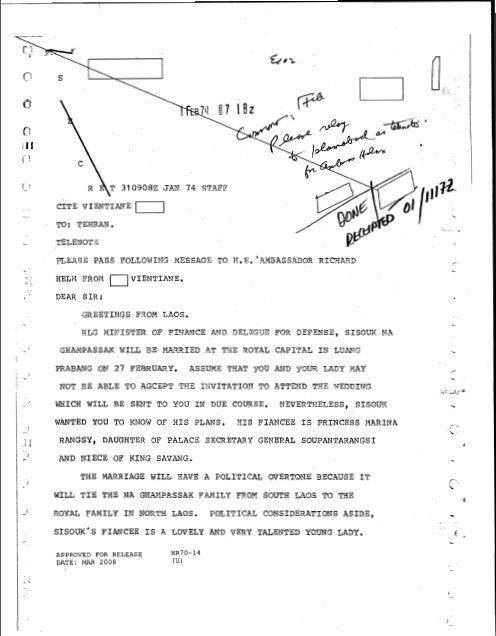 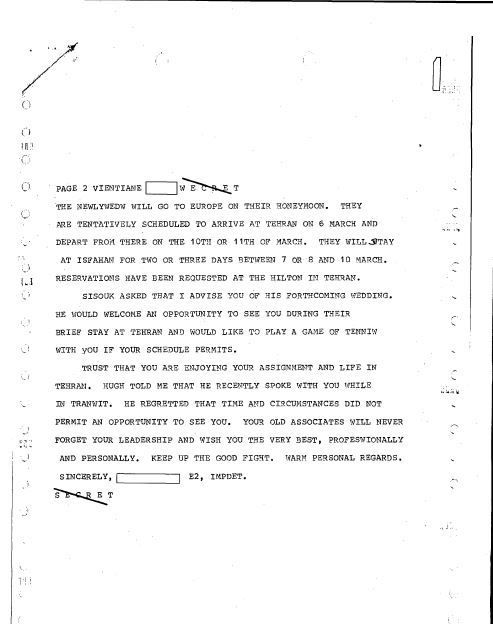 A declassified cable reveals that back in January 1974, John Gunther Dean, chargé d'Affaires of the US embassy sent a cable to Ambassador Richard Helm (Director of Central Intelligence until February 2, 1973 and then ambassador to Iran from 1973-1977).

The cable informed that Sisouk Na Champassak will marrry Princess Marina Rangsy, daugther of Royal Palace secretary general Souphantharangsi. The cable, which has been declassified in March 2008 by the Obama administration, reads:

"Greetings from Laos. RLG Minister of Finance and Delegue for Defense, Sisouk Na Champassak will be married at the Royal Capital Luang Prabang on February 27. Assume that you and your lady may not be able to accept the invitation to attend the wedding which will be sent to you in due course. Nevertheless, Sisouk wanted you to know of his plans. His fiancee Marina Rangsy, daughter of Palace Secretary Soupantarangsy and niece of King Savang.

The marriage will have a political overtone because it will tie the Na Champassak family from South Laos to the royal Family in North Laos. Political considerations aside, Sisouk's fiancee is a lovely and very talented young lady.

The newlyweds will go to Europe on their honeymoon. They are tentatively scheduled to arrive at Tehran on 6 March and depart from there on the 10th or 11th of March. They will stay at Isfahan for two or three days between 7 or 8 or 10 March. Reservations have been requested at the Hilton in Tehran.

Sisouk asked that I advise you of his forthcoming wedding. He would welcome an opportunity to see you during their brief stay at Tehran and would like to play a game of tennis with you if your schedule permits.

Trust that you are enjoying your assignment and life in Tehran. Hugh told me that he recently spoke with you while in transit. He regretted that time and and circumstances did not permit an opportunity to see you.Your old associates will never forget your leadership and wish you the very best, professionally and personally. Keep up the good fight. Warm personal regards. Sincerely".

A second correspondence declassified in 2005 by the Obama administration written from John Gunther Dean  to Monteagle Stearns, Deputy Assistant Secretary of State for East Asian and Pacific Affairs from December 1973 reads:

1. WE HAVE LEARNED THAT THE KING HAS APPROVED AND SET DATE OF FEBRUARY 27 FOR THE WEDDING OF SISOUK AND TIAO MARINA RANGSY, DAUGHTER OF PALACE SECGEN SOUPANTARANGSI, AND FULL NIECE OF THE KING. BOUN OUM WILL REPORTEDLY VISIT LUANG PRABANG WITHIN NEXT FEW WEEKS TO FORMALLY PETITION FOR MARINA'S HAND IN MARRIAGE.

2. THE WEDDING HAS NOT YET BEEN ANNOUNCED AND AT THIS STAGE IS BEING CLOSELY HELD, BUT I THOUGHT THAT YOU AND AMBASSADOR GODLEY WOULD LIKE TO KNOW. WE WILL KEEP YOU INFORMED AS TO WHEN CONGRATULATIONS, GIFTS, ETC., CAN BE SENT.